Robotics education is changing for the better. The days of asking students to spend endless hours with heads buried in textbooks, and with limited practical application, are coming to an end. This is in large part because industry-leading robots are reaching a level of accessibility, both in terms of affordability and useability, never before seen.

Collaborative robots (cobots for short) are leading the charge here. They offer the opportunity for classrooms to include scaled-down versions of industrial robots, with all their functionality, via safe, adaptable devices.

Right out of the box, students can practice simulations of real-life scenarios, through the tactile programming options available. As they look to create their own simulations and scenarios, they’ll discover the real-world joy of more complex programming. 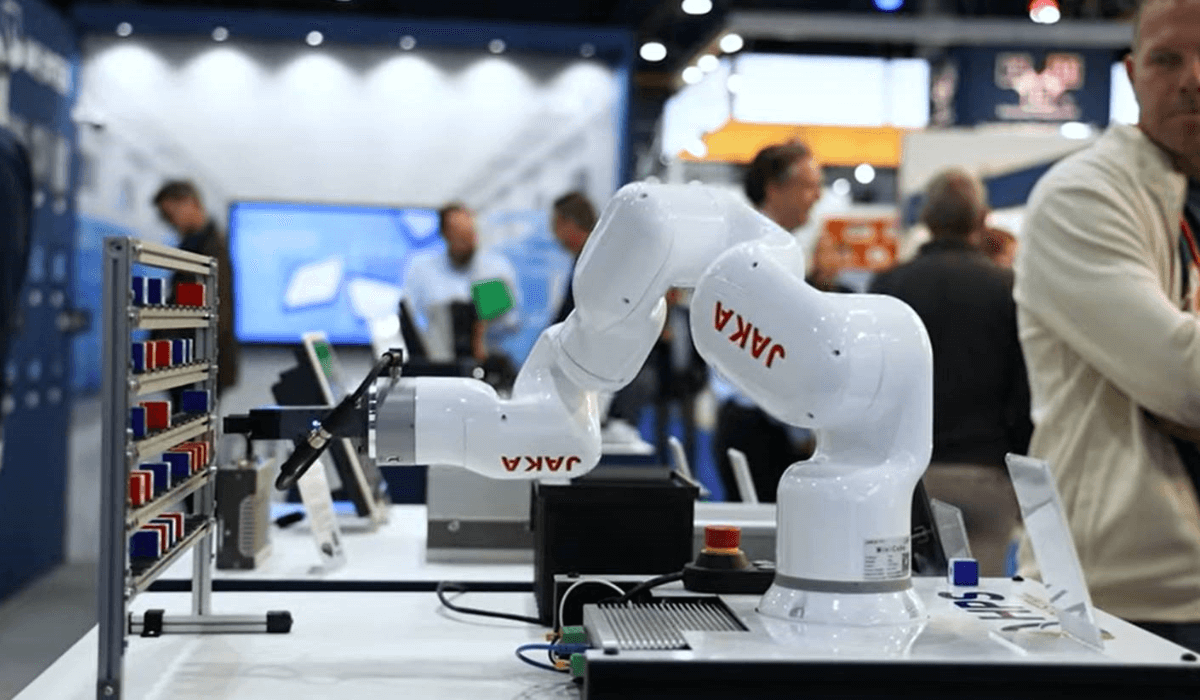 Aware that cobots operate in different environments according to different needs, we’ve come up with three distinct robotic kits that cover a wide array of cases that robotics parofessionals face in the real world.

They each offer both entry-level capabilities, and advanced functionality, such that the same piece of equipment can be used across multiple age groups and experience levels. 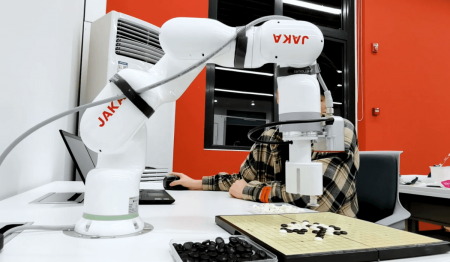 For a fun but also rich demonstration of robotics theory, machine vision, smart manufacturing, or general robotics operations, this kit is ideal.

It combines two powerful elements: first, a low barrier of entry, meaning that beginners can start programming operations with ease; and second, a high level of customizability, thanks to integration with professional programming languages, meaning that operations can constantly be made more complex and streamlined.

While the cobot is ready to use straight out of the box, programmable using any smart device such as a tablet or phone through the JAKA APP, it can also be enhanced with additional gear. 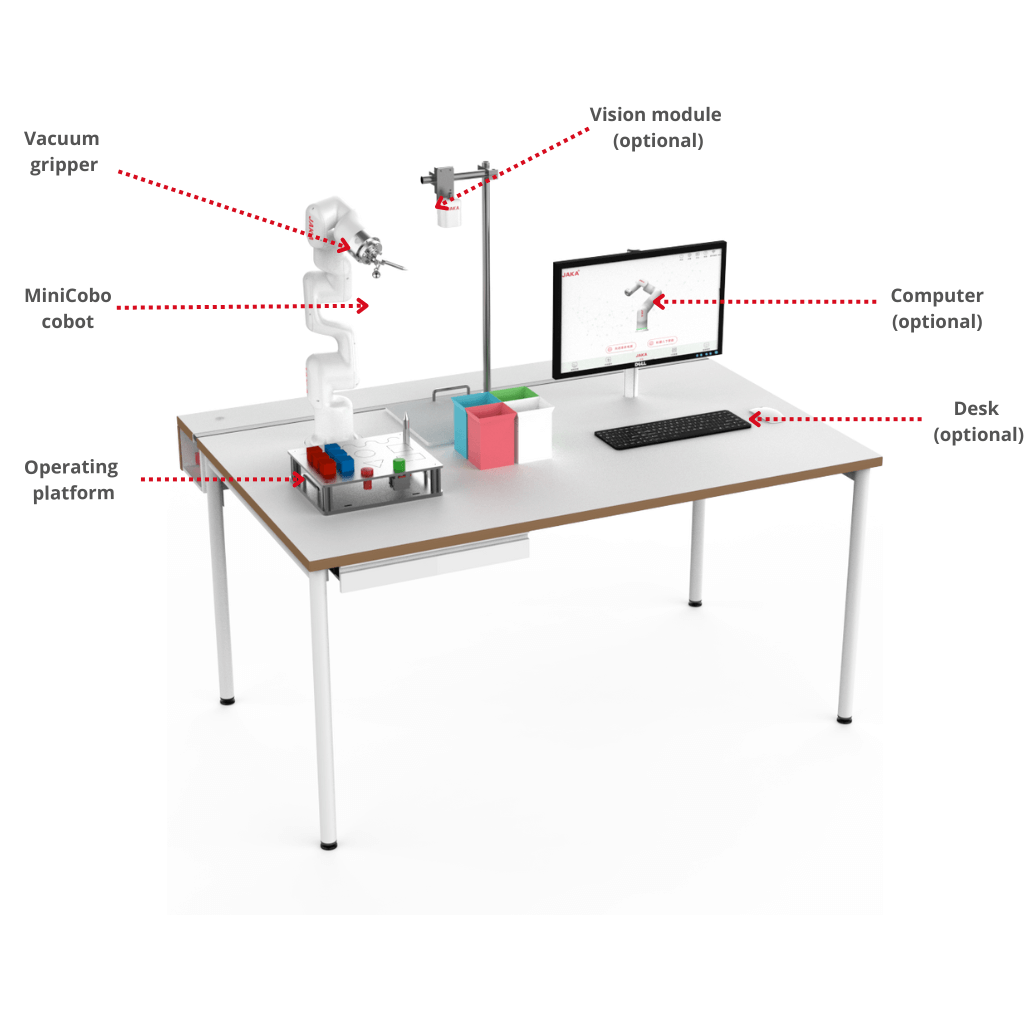 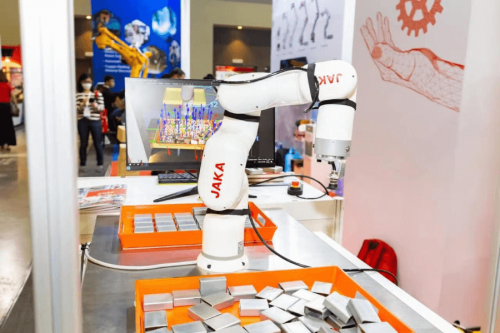 Imagination is the only limitation to the number of things that the basic cobot teaching platform can do.

As a core set of things that can be done, here are a few of our favourites:

About optionals for the kit 1

These optional extras open up a whole new gamut of possible applications, and comprise exactly the same pieces of equipment that JAKA equips professional facilities with. 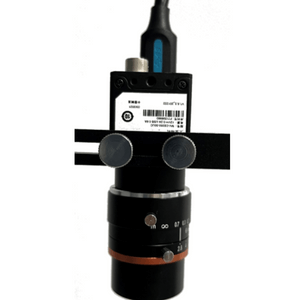 To give students the ability to add the following processes to their robot operations:

Classrooms can now make use of this technology in robotics education, traversing the engineering planes of

✅ and an array of binocular features. 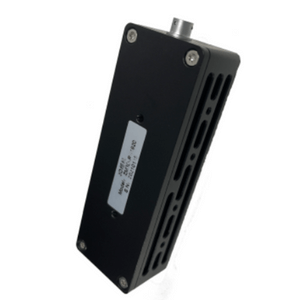 To see al technical features in one place
Download guide 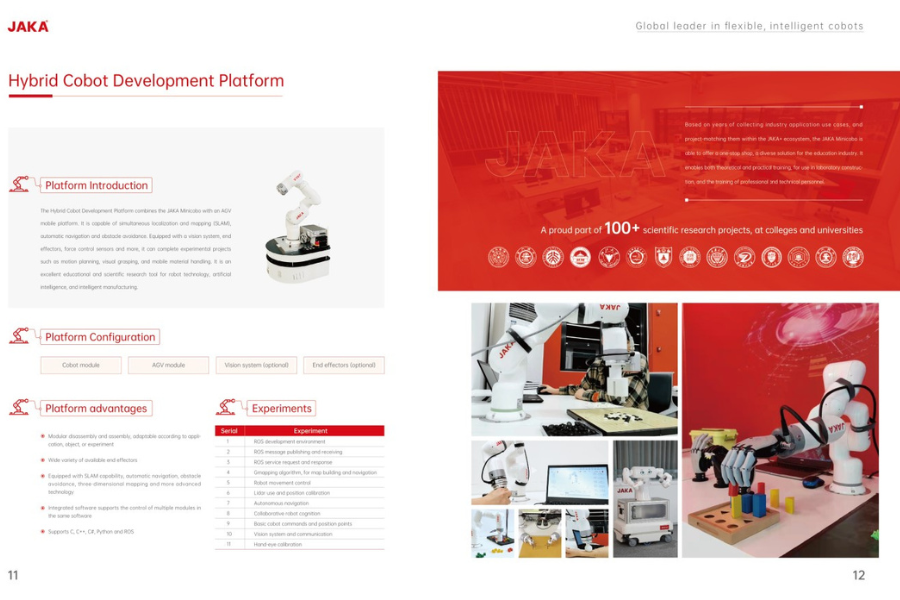 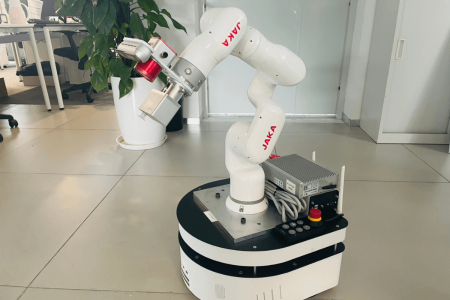 The Hybrid Cobot Development Platform gives the JAKA MiniCobo the gift of mobility, integrating it with an Automated Guided Vehicle (AGV). This amazing kit is capable of simultaneous localization and mapping (SLAM), automatic navigation and obstacle avoidance, keeping students and classrooms safe and fun.

With JAKA Lens 2D it can complete tasks such as visual grasping, vision-based motion planning, and dynamic material handling – the cobot arm can be processing or handling something while the AGV is on the move! Short answer – a lot! Here are a few examples.

✅ LiDAR use and position calibration

The vacuum gripper and vision modules take an already great kit and make it better.

Unlike many vacuum grippers, the JAKA VAC doesn’t need a dedicated air source to operate it.

It is a self-contained unit that only requires a power supply, and is fitted to the end of the cobot arm, connecting through an IO port.

With simple programming, it can pick up a variety of different objects.

The vision module consists of the JAKA Lens 2D camera, lenses and a light source.

It can either be fixed externally or mounted at the end of the cobot arm.

Looking to automate but afraid to lose your investment?

Read our the top 9 reasons to automate with JAKA cobots guide!

While the other kits include the vision module or vacuum gripper as optional, this kit is specifically designed to give high school robotics students and others a deep understanding of how these elements work together from the start.

By dedicating a whole kit to this setup, we’ve concentrated the most valuable lessons on how vision can be used in robotics, providing a large selection of real-world scenarios for students to try out.

What type of projects is Kit #3 best suited for?

Like the other MiniCobo education kits, Kit #3 is adaptable according to user needs, and the desired learning outcomes of any given course.

As a basic we’ve included and recommend exploring the following:

✅ Use and control of teaching device

Included with Kit #3 is a suite of tailored teaching software, and visual development software, that ensures smooth interaction between teachers, students, and the robot arm.

The software allows for both simple and complex functionality.

The JAKA APP – used for graphical programming – can be installed on any smart device.

This alleviates the need to buy additional equipment, as existing classroom tech can be used with the Minicobo education kits.

The vision programming software is highly adaptable. As a foundation, it includes :
✅ image processing
✅ motion control
✅ external communication tools
✅ including calibration
✅ positioning
✅ measurement
✅ detection
✅ and other functions.
It also provides an API and supports secondary development.

The MiniCobo education packages represent a true a step forward in robotics education. By placing the power of industrial robotics in the hands of students, they enable the engineers of the future to achieve levels of understanding that were previously only attainable in tertiary or post-university education.

By providing a low barrier for entry, and high level of potential complexity, they give beginners the chance to become pros, all in within the realm of the classroom.

Meet JAKA At ITAP 2022 in Singapore

JAKA booth no 3D17
Book your spot now!
Contact us

What you will see:

Genes of Technology developing since 1979. Have helped hundreds of businesses to automate their production lines. Pro series with IP68, operations 24/7 almost 6 years without single break.

As a global leader in flexible intelligent robots, it is our great honor to have you as our guest as we hope to establish fruitful long-term business relationship with your company. Within the immersive experience you will discover potential of JAKA collaborative robots.

Industrial Transformation ASIA-PACIFIC – a HANNOVER MESSE event (ITAP) is a strategic platform that evolves with the industry and is shaped by the leaders and experts in support of their transformative initiatives; a journey that is necessary and made possible by the process of digitalisation by Industry 4.0.

Designed and curated to help companies in Asia-Pacific to START, SCALE, and SUSTAIN their adoption of Industry 4.0 processes and solutions. ITAP brings together the ecosystem of players and stakeholders across the value chain to learn, share, collaborate, network, and do business with each other.

Machine tending is by far one of the most popular uses for collaborative robots by manufacturers. Tending, in this context, refers to loading raw materials or parts, and then unloading them once they’ve been processed, from a CNC machine. It involves picking up and placing the objects, opening and closing safety doors, working in harmony with the workholding and the parts supply and removal areas.

It’s a repetitive task, but it requires a fair amount of accuracy and adaptation, as often parts are supplied in irregular positions, and must be adjusted to correctly fit to the workholding. Until recently, for this reason, machine tending is one area in which industrial automation has been a challenge. Collaborative robots, or cobots for short, are changing this. They are cornerstones of smart factories, in which the flexibility, accuracy and safety of human work can be matched in automation.

Machine tending applications such as cutting, milling, drilling and injection molding can thus be carried out 24/7, allowing manufacturers to greatly scale up operations. What new technology is making this possible, and how is it different to traditional automation? Below, we answer these questions by looking at five key new technologies.

It’s now common knowledge in the manufacturing industry that collaborative robots are safe, easy to configure, and reliable. But for those interested in automated cobot solutions, what else is there to know about these robotic arms?

One of the biggest challenges of machine tending automation has been that of working with raw materials or parts that may be supplied to the working area in irregular shapes or positions. When unstructured supply has been the case, as it has been and still is in many factories, it has been essential for a human to correctly identify, realign and place objects accurately in CNC machines. Parts may be supplied at an angle, on trays in multiple, irregular positions, or even piled up. Most traditional robots simply aren’t capable of effectively surmounting this challenge.

Giving collaborative robots the ability to see brings them in line with the human ability to adapt to these supply scenarios. Integrated 2D and 3D cameras, mounted on cobot arms, allow the measurement of distance and object size, and the identification of rotation and absolute position. This allows gripping and sorting, in correction of irregularity.

About the JAKA Vision System:

JAKA cobots can be fitted with the JAKA Lens 2D, an integrated high-resolution 2D camera. It enables the recognition of 2D surfaces, 3D objects, colors, locations and distances.

Force sensors in cobots serve multiple functions, allowing them to operate in relatively unstructured environments with accuracy and reliability. They’re commonly used in tasks like grinding, deburring, sanding or polishing, to maintain a constant or controlled amount of applied force.

However, they’re also used in machine loading and unloading, as they become responsible for engaging emergency stops and protective stops, and can help identify jig stops, to control the location and/or motion of items when loading them into a CNC machine.

The JAKA Zu s industrial force sensor, which may be installed at the base or the end of any Zu s series cobot, increases precision. It gives the cobots an ability to accurately performs tasks like palletizing, polishing, or sanding on complex surfaces.

Working together with force sensors, force control modules create full-arm collision detection. The moment that any action is interrupted by an unexpected force, the control module can stop the cobot from continuing its motion, allowing for maximum safety around human workers and unpredictable environments.

In machine tending, the force control module takes on the additional responsibility of keeping track of and adjusting for workpiece behaviour, and workpieces whose surface properties or geometry can be altered through improper handling.

The JAKA Pro cobots are perfect for machine tending in challenging environments. They possess IP68 grade protection, making them immune to dust and water.

In perhaps the most significant development in automation, especially for tending, cobots are now equipped with advanced AI technology. This allows them to be greater than the sum of their parts, as they can perceive, recognize, learn and adapt to new situations and environments.

They are given the ability to reason, through probabilistic analysis, neural networks and fuzzy logic, and then make autonomous decisions. Human operators manually teach the cobots the fundamentals of a task; they then perform it dynamically.

These five technologies are keystones in the advancement of industrial automation, when it comes to machine tending. From force sensors to AI, collaborative robots now feature an arsenal of tools that allow for machine loading and unloading with the precision and reliability of a human worker.

Manufacturers are thus placed on a road to building true smart factories, without concerns about slow ROI, or the prospect of incorrect machine tending execution. This frees up human workers to occupy less repetitive, value-added roles, and allows for the rapid scaling of production capacity.

JAKA Robotics aims to provide best cobot solutions to factories of all sizes. JAKA cobots build with prioritised safety and precision in mind. They have already helped hundreds of manufacturers automate their production lines and boost productivity. From welding to assembly, these flexible robot arms handle their responsibilities 24/7.